But the most interesting bit is that I added hi-res comics in the Paul series and the header logos. This means that if you have a retina display (iPad or iPhone 4), you will see much crisper and detailed comics. All of that thanks to me using Inkscape from the start, which uses vector graphics.

Being a bit geeky as I am I created a small script to do this for all comics at once, using Inkscape and Gimp. If you are interested the code is in this github gist.

So you are asking, what's the difference, well here's an example. I captured screenshots before and after enabling this, on an iPhone 4. The pixelation that the iPhone had done on the first one is obvious. 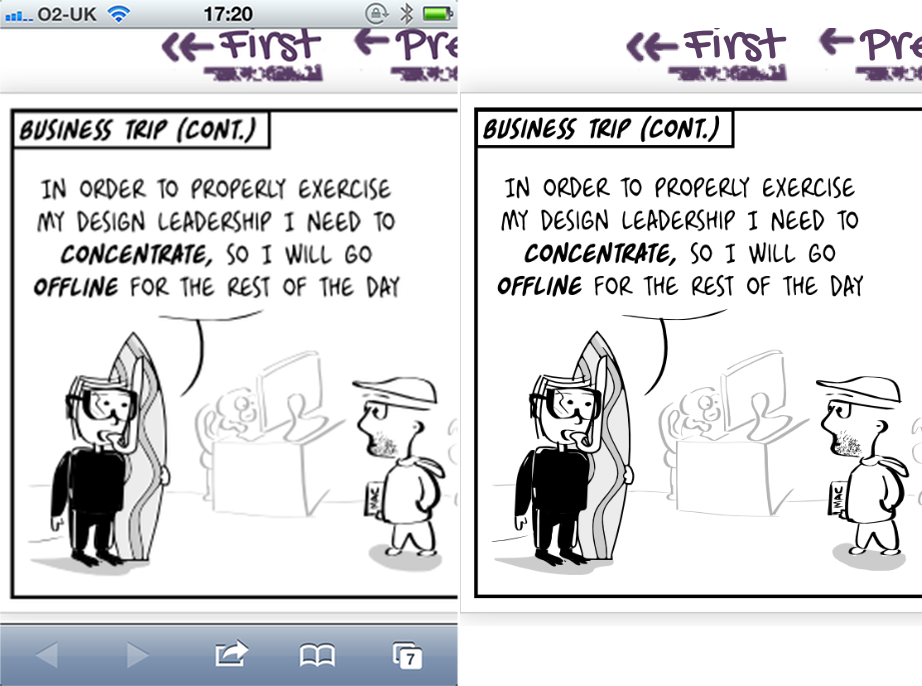 So what's next... well I have a huge pending thing in the form of translation. To Spanish, mostly. I've promised to translate these comics a few times, and have some actually translated already so I guess at some point I'll have to put them online. Another biggie is making the website react to the device you are using, so to make it easier to navigate from a mobile.

Oh, and you know, maybe write some comics :).

Yes, I could do that.

Final note: I discovered there's a limitation in the actual size an image can have on an iPad's browser. That doesn't bode well for the super long images I used in LIFE/interior. For the time being I sliced the large pages into smaller ones but haven't yet added hi-res versions as they are still too big. More info in the official documentation, found here.